SUMMARY: The FDA on May 7, 2018 approved DARZALEX® (Daratumumab) in combination with VELCADE® (Bortezomib), a proteasome inhibitor, Melphalan, an alkylating agent and Prednisone VMP regimen), for the treatment of patients with newly diagnosed multiple myeloma who are ineligible for Autologous Stem Cell Transplant (ASCT). Multiple Myeloma is a clonal disorder of plasma cells in the bone marrow and the American Cancer Society estimates that in the United States, 30,770 new cases will be diagnosed in 2018 and 12,770 patients are expected to die of the disease. Multiple Myeloma in 2018 remains an incurable disease. The therapeutic goal therefore is to improve Progression Free Survival (PFS) and Overall Survival (OS). With a record number of regulatory approvals for myeloma treatment over the past 12 years, the median survival for patients with myeloma is over 10 years.

The incidence of multiple myeloma increases with age and the median age of patients diagnosed with multiple myeloma is approximately 70 yrs. Elderly patients with myeloma in the US are often treated with a combination of REVLIMID® (Lenalidomide) and Dexamethasone, whereas Melphalan, Prednisone, and Thalidomide (MPT) and VELCADE® (Bortezomib), Melphalan and Prednisone (VMP) are the most widely used regimens outside the US. These regimens are associated with a PFS of 18-24 months and an OS of 4-5 years. For patients with newly diagnosed multiple myeloma who are ineligible for ASCT, treatment with VMP regimen has been a standard effective regimen, based on the VISTA (Velcade as Initial Standard Therapy in Multiple Myeloma: Assessment with Melphalan and Prednisone) trial. 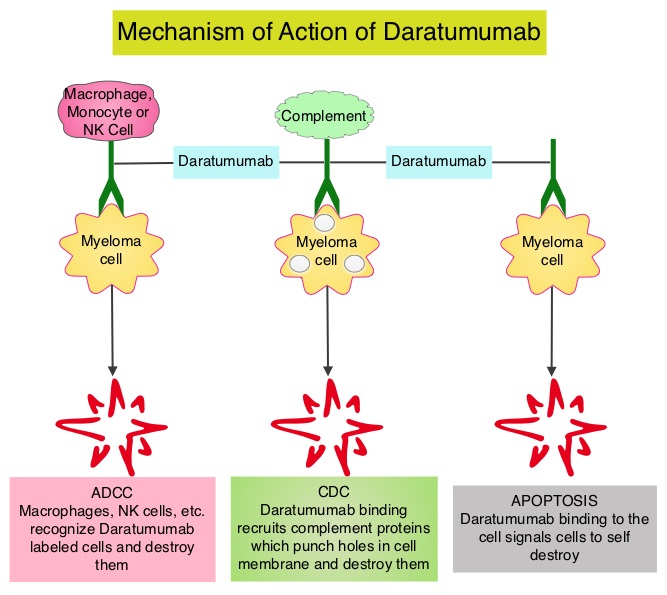 DARZALEX® (Daratumumab) is a human IgG1 antibody that targets CD38, a transmembrane glycoprotein abundantly expressed on malignant plasma cells and with low levels of expression on normal lymphoid and myeloid cells. DARZALEX® exerts its cytotoxic effect on myeloma cells by multiple mechanisms, including Antibody Dependent Cellular Cytotoxicity (ADCC), Complement Dependent Cytotoxicity (CDC) and direct Apoptosis. Additionally, DARZALEX® may have a role in immunomodulation, by depleting CD38-positive regulator immune suppressor cells, and thereby expanding T cells, in patients responding to therapy. In previously treated patients with myeloma, DARZALEX® in combination with REVLIMID® and Dexamethasone (POLLUX trial) as well as in combination with VELCADE® and Dexamethasone (CASTOR trial), induced higher Response Rates and significantly prolonged PFS, reducing the risk of disease progression or death by over 60% in previously treated myeloma patients.

ALCYONE is a multicenter, randomized, open-label, active-controlled, phase III trial in which DARZALEX® given along with VELCADE®, Melphalan and Prednisone (VMP regimen) was compared with VMP alone (control group), in patients with newly diagnosed multiple myeloma, who were ineligible for Autologous Stem Cell Transplantation (ASCT). Of the 706 enrolled patients, 350 were assigned to the DARZALEX® group and 356 to the control group. The median age was 71 yrs. All the patients received up to nine 6 week cycles of VELCADE® 1.3 mg/m2 SQ, twice weekly on weeks 1, 2, 4, and 5 of cycle 1 and once weekly on weeks 1, 2, 4, and 5 of cycles 2-9), Melphalan 9 mg/m2 orally, once daily on days 1-4 of each cycle, and Prednisone 60 mg/m2 once daily on days 1-4 of each cycle. In the study group, patients received DARZALEX® 16 mg/kg IV administered with Dexamethasone 20 mg oral or IV (to manage infusion reactions), once weekly for a total of 6 doses, every 3 weeks for a total of 16 doses and every 4 weeks thereafter until disease progression or unacceptable toxicity. The Primary end point was PFS. Secondary end points included Overall Response Rate, rates of Very Good Partial Response, Complete Response rate, Minimal Residual Disease negativity and Overall Survival.

At a median follow up of 16.5 months in a prespecified interim analysis, the 18-month PFS was 71.6% in the DARZALEX® group and 50.2% in the control group (HR=0.50; P<0.001). This meant a 50% reduction in the risk of disease progression or death when DARZALEX® was added to VMP regimen. The median PFS for DARZALEX® plus VMP had not yet been reached, compared to a median PFS of 18.1 months for patients who received VMP alone. The Overall Response Rate was 90.9% in the DARZALEX® group, as compared with 73.9% in the control group (P<0.001), and the rate of Complete Response or better (including stringent Complete Response) was 42.6%, versus 24.4% (P<0.001). In the DARZALEX® group, 22.3% of the patients were negative for Minimal Residual Disease (at a threshold of 1 tumor cell per 105 white cells), as compared with 6.2% of those in the control group (P<0.001). The most common adverse events were cytopenias noted in both treatment groups, and with the exception of infections (23% versus 15%), combining DARZALEX® with VMP regimen did not increase overall toxicities. DARZALEX® associated infusion-related reactions occurred in 28% of the patients.

SUMMARY: ColoRectal Cancer (CRC) is the third most common cancer and third leading cause of cancer-related deaths in both men and women in the United States. The American Cancer Society estimates that approximately 140,250 new cases of ColoRectal Cancer will be diagnosed in the United States in 2018 and over 50,630 patients are expected to die of the disease. The lifetime risk of colorectal cancer is 4.2% (1 in 24) in women and 4.5% (1 in 22) in men.

Vitamin D is known for its role in maintaining bone health and there is a growing body of evidence suggesting that Vitamin D has colon cancer preventing properties and may induce antitumor immunity. A study by Song and colleagues (Gut. 2015;64:260-271) showed that high plasma level 25-Hydroxy Vitamin D [25(OH)D] was associated with lower risk of colorectal cancer with intense immune reaction, supporting that vitamin D through tumor-host interaction may play a role in cancer immunoprevention. There also appears to be a strong association between plasma 25(OH)D level and colorectal cancer (CRC) specific mortality, with better outcomes in CRC patients with higher plasma levels of 25(OH)D, treated with a combination of chemotherapy and biologic agents. However the plasma concentrations of 25(OH)D that minimize colorectal cancer risk are unknown and even though epidemiological studies suggest a protective role for vitamin D in colorectal carcinogenesis, the evidence has been inconclusive. The current recommendations regarding vitamin D intake are based only on bone health. Sources of vitamin D include fatty fish like salmon, tuna and mackerel, foods fortified with vitamin D like some dairy products, cereals and orange juice as well as egg yolks. It is recommended that vitamin D be obtained through diet whenever possible rather than sun exposure, because of the risk of skin cancer with excessive UV radiation.

This present study was conducted to address inconsistencies in prior studies, on the protective role for vitamin D in colorectal cancer, and to investigate associations in population subgroups. The authors analyzed participant-level data, collected before colorectal cancer diagnosis, from 17 prospective cohorts which included 5706 colorectal cancer cases and 7107 control participants, from the US, Europe, and Asia, with a wide range of plasma 25(OH)D concentrations. A single, widely accepted assay and laboratory was used for new plasma 25(OH)D measurements, and calibration of previously measured plasma 25(OH)D. This calibration approach enabled the authors to systematically explore risk, utilizing the same assay, over the broad range of vitamin D levels seen internationally.

The FDA on June 13, 2018 granted accelerated approval to KEYTRUDA® for the treatment of adult and pediatric patients with refractory Primary Mediastinal Large B-Cell Lymphoma (PMBCL), or who have relapsed after two or more prior lines of therapy. KEYTRUDA® is a product of Merck and Co., Inc.

The FDA on June 13, 2018 approved AVASTIN® for patients with epithelial ovarian, fallopian tube, or primary peritoneal cancer, in combination with Carboplatin and Paclitaxel, followed by single-agent AVASTIN®, for stage III or IV disease, after initial surgical resection. AVASTIN® is a product of Genentech, Inc.

The FDA on June 12, 2018 approved KEYTRUDA® for patients with recurrent or metastatic cervical cancer with disease progression on or after chemotherapy, whose tumors express PD-L1 (CPS 1 or more), as determined by an FDA-approved test. KEYTRUDA® is a product of Merck and Co., Inc.

The FDA on June 8, 2018 granted regular approval to VENCLEXTA® for patients with Chronic Lymphocytic Leukemia (CLL) or Small Lymphocytic Lymphoma (SLL), with or without 17p deletion, who have received at least one prior therapy. VENCLEXTA® is a product of AbbVie Inc. and Genentech Inc.

The FDA on June 7, 2018 approved MIRCERA® for the treatment of pediatric patients 5 to 17 years of age on hemodialysis who are converting from another ESA after their hemoglobin level was stabilized with an ESA. MIRCERA® is a product of Vifor Pharma Inc.

The FDA on June 4, 2018 approved FULPHILA® as a biosimilar to NEULASTA® (Pegfilgrastim, Amgen, Inc.), to decrease the chance of infection as suggested by febrile neutropenia in patients with non-myeloid cancer, who are receiving myelosuppressive chemotherapy that has a clinically significant incidence of febrile neutropenia. FULPHILA® is a product of Mylan GmbH.

The FDA on May 21, 2018 approved DOPTELET® for thrombocytopenia in adults with chronic liver disease scheduled to undergo a procedure. DOPTELET® is a product of AkaRx Inc.