SUMMARY: ColoRectal Cancer (CRC) is the third most common cancer diagnosed in both men and women in the United States. The American Cancer Society estimates that approximately 145,600 new cases of CRC were diagnosed in the United States in 2019 and about 51,020 patients died of the disease. The lifetime risk of developing CRC is about 1 in 23. Adjuvant chemotherapy for patients with resected, locally advanced, node-positive (Stage III) colon cancer has been the standard of care since the 1990s. Adjuvant treatment with an ELOXATIN® (Oxaliplatin) based chemotherapy regimen has been considered standard intervention since 2004, for patients with Stage III colon cancer, following surgical resection, and has been proven to decrease the chance of recurrent disease. Chemotherapy regimens have included (FOLFOX – Leucovorin, 5-FluoroUracil, ELOXATIN®) or CAPOX/XELOX (XELODA®/Capecitabine and ELOXATIN®), given over a period of 6 months. In spite of these advancements, defining patient subsets at high risk of recurrence following standard adjuvant therapy remains challenging and treatment failure can only be acknowledged when clinical recurrence is documented.
Cell-free DNA (cfDNA) refers to DNA molecules that circulate in the bloodstream after cell apoptosis or necrosis. A specific portion of cfDNA that originates from tumor cells is referred to as circulating tumor DNA (ctDNA), which can be detected in the cell-free component of peripheral blood samples in almost all patients with advanced solid tumors including advanced colorectal cancer. ctDNA is a valuable biomarker and allows early detection of relapse. Several studies have shown that detectable ctDNA following surgery for early stage cancers, is associated with a very high risk of recurrence. The authors in this publication report on the results of a correlative biomarker study in patients with Stage III colon cancer, undergoing standard adjuvant chemotherapy. 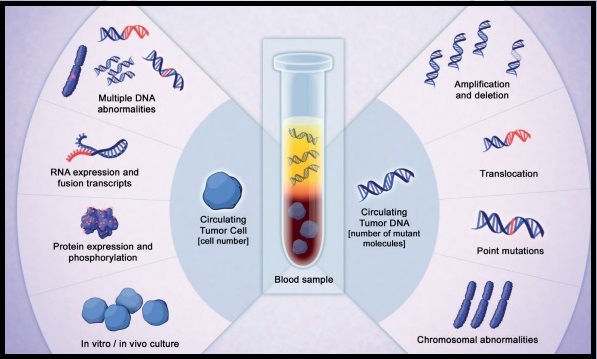 A multicenter, population-based, cohort study was conducted to determine whether serial post-surgical and post-chemotherapy ctDNA analysis could provide a real-time indication of efficacy of adjuvant therapy in Stage III colon cancer. In this study, 100 patients with newly diagnosed Stage III colon cancer who were planned to receive 24 weeks of adjuvant chemotherapy were enrolled. Patients had R0 resection with no evidence of metastatic disease on staging CT of the chest, abdomen, and pelvis before surgery. The chemotherapy regimen was chosen by the treating physician, who was blinded to the ctDNA result. High-risk patients were defined as those having pT4 and/or pN2 disease according to the pTNM staging system. Blood samples for ctDNA and CEA (CarcinoEmbryonic Antigen) analysis were collected 4-10 weeks after surgery prior to commencement of adjuvant chemotherapy and at the completion of adjuvant therapy, within 6 weeks of the final cycle of chemotherapy. All patients had a surveillance CT scan 4-8 weeks after completion of adjuvant chemotherapy. Follow up surveillance included clinical exam every 3 months along with CEA measurement and annual CT imaging for 3 years. Serial plasma samples were collected after surgery and after chemotherapy. Somatic mutations in individual patient tumors were identified by massively parallel sequencing of 15 genes commonly mutated in colorectal cancer, and personalized assays were designed to quantify ctDNA. For each patient, one mutation identified in the tumor tissue was assessed in the plasma for the presence of ctDNA. The median duration of follow up was 28.9 months and the primary aim of this study was to demonstrate the association between postsurgical and post-chemotherapy ctDNA detection and the risk of recurrence.
Among the 96 evaluable patients, circulating tumor DNA was detectable in 20 of 96 (21%) post-surgical samples and these patients had an increased risk of recurrence with associated inferior Recurrence-Free Survival, (HR=3.8; P<0.001). The estimated 3 year Recurrence Free Interval (RFI) for patients with positive ctDNA findings was 47% and for those with ctDNA-negative findings was 76%. Circulating tumor DNA was detectable in 15 of 88 (17%) post-chemotherapy samples. The estimated 3 year RFI was 30% when ctDNA was detectable after chemotherapy and 77% when ctDNA was undetectable (HR=6.8; P<0.001). Postsurgical ctDNA status was an independent predictor of disease recurrence after adjusting for known clinicopathologic risk factors (HR=7.5; P<0.001).
The authors concluded that post-surgical and post-chemotherapy circulating tumor DNA analyses is a promising prognostic marker in Stage III colon cancer, and may identify patients at high risk of recurrence, despite completing standard adjuvant treatment. This high-risk population presents a unique opportunity to explore additional therapeutic approaches. Circulating Tumor DNA Analyses as Markers of Recurrence Risk and Benefit of Adjuvant Therapy for Stage III Colon Cancer. Tie J, Cohen JD, Wang Y, et al. JAMA Oncol. 2019;5:1710-1717.